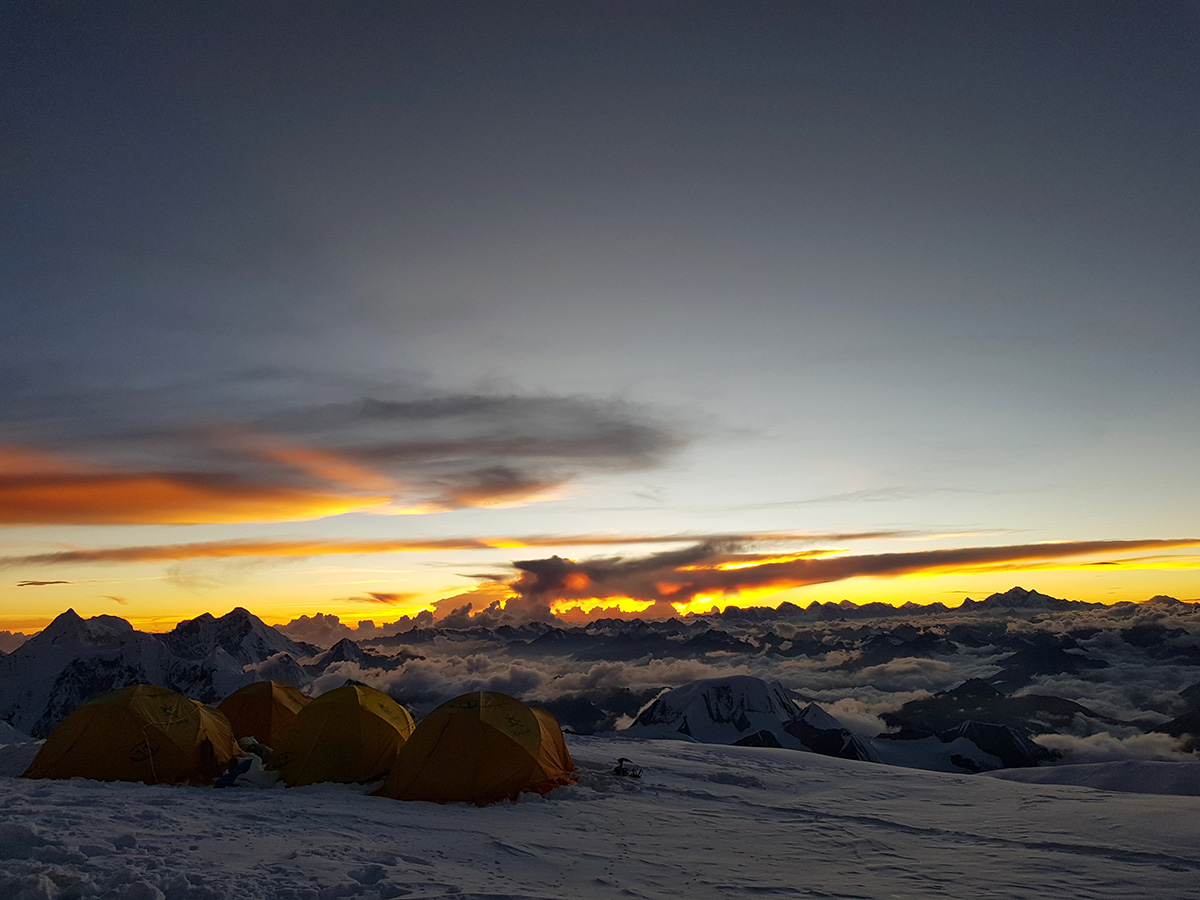 Cho Ouy (8201m) was my fourth 8,000m peak. This was, however, the first time I climbed in Tibet—and I was more excited about the experience compared to other climbs … for several reasons. This time, I got to get introduced to the Tibetan culture and people more closely. People had been warning me about the problems with the Chinese army and police, so I was worried and afraid.

As always, first I flew in Kathmandu. On August 31, after meeting other climbers and receiving my permission and visa, we flew to Lhasa. It was very different from what I was used to seeing on the Nepali side. The architecture was completely different, along with the many colors, beautiful Tibetan faces, and it was quite religious.

But, YES, every important entrance was controlled by the Chinese police or army.

The day we were visiting Lhasa, they were having a ceremony in the plaza. Everyone walked in a big square following one direction only. At the same time, they were rolling something in their hands while singing and praying.

Then, we visited the Patala Palace: the house where Llama was born and used to live. We had to pass many police control formalities, to get inside the main building. A rich history with many gods, but no Llama. It felt strange to go inside a sacred temple and being surrounded by Chinese police… but, I was glad I got the chance to see something. 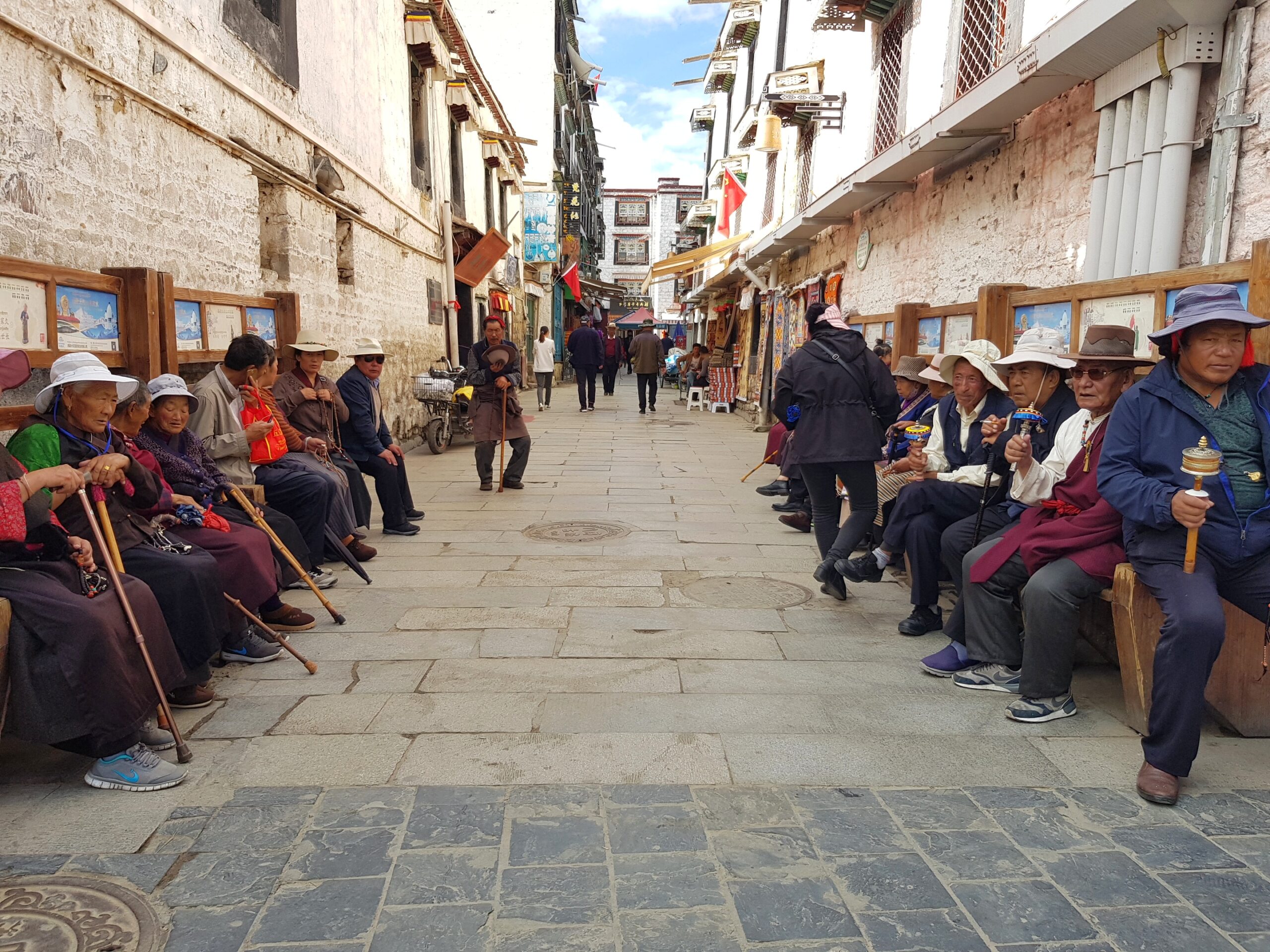 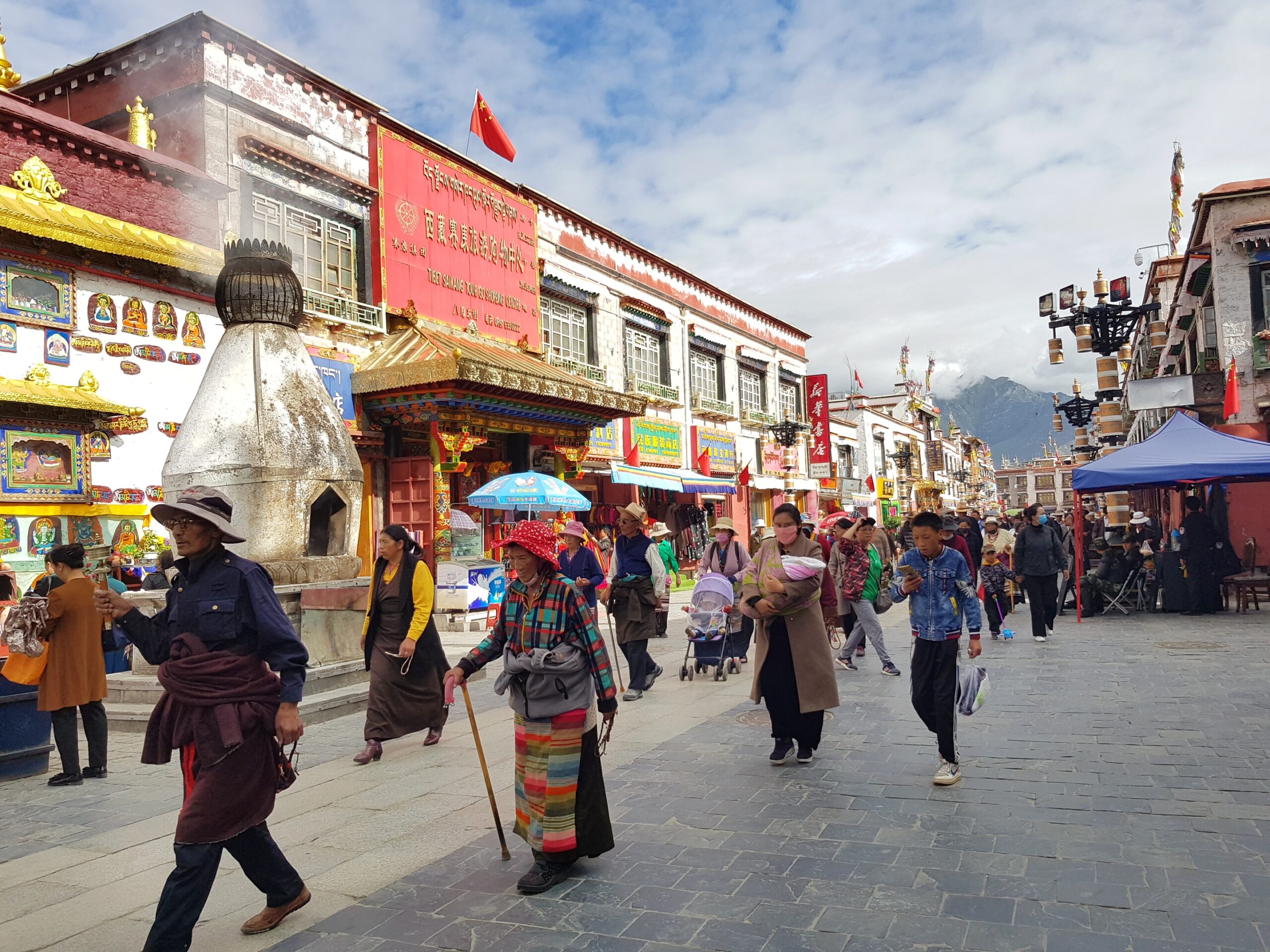 For the next two days, we drove to reach Tingri, the last village before the camps. In Tingri, we did some running and walking each day—to keep the body active.
At this point, it began to feel more like an expedition … seeing other climbers and people, talking, and sharing more about ourselves. 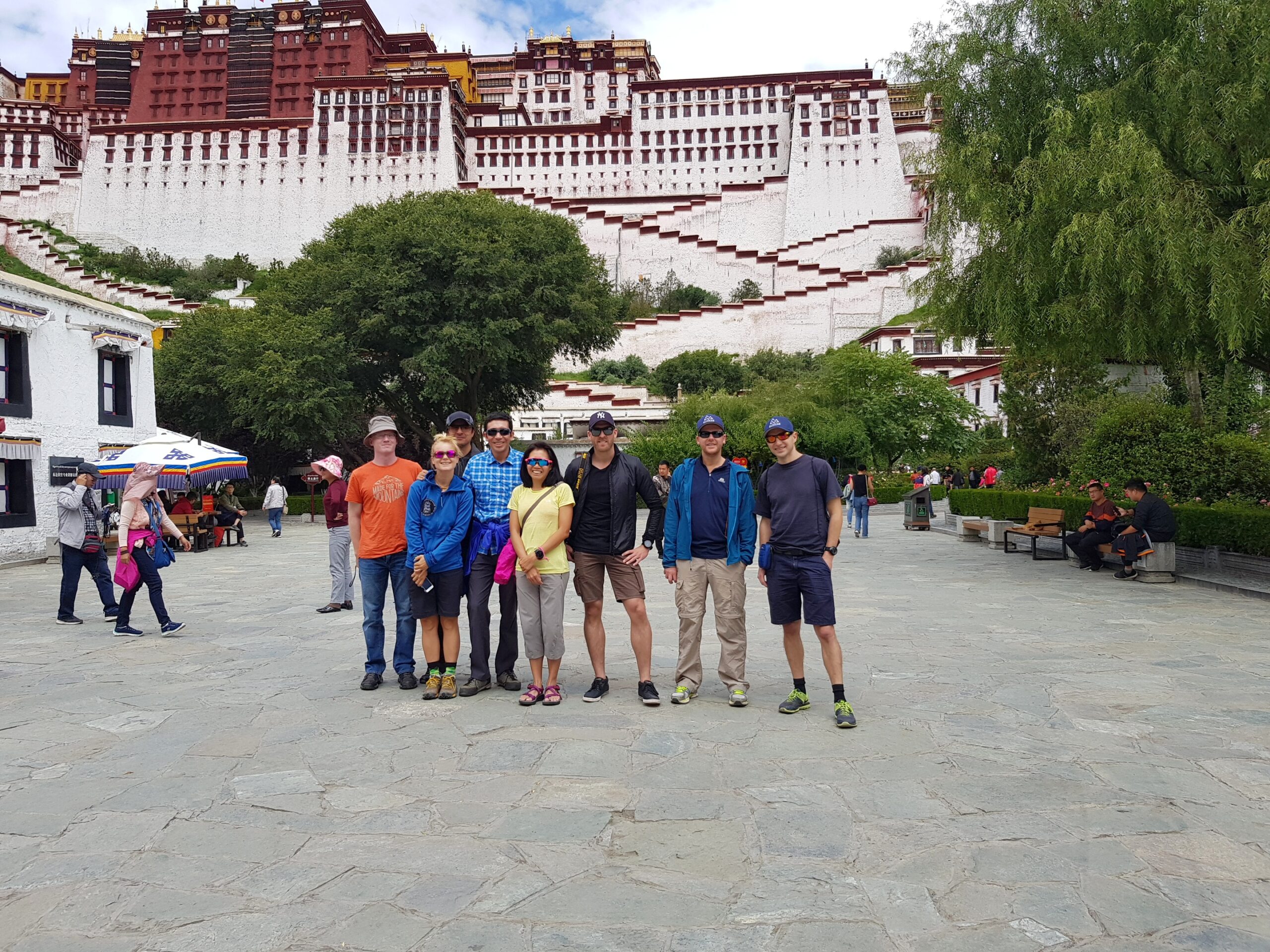 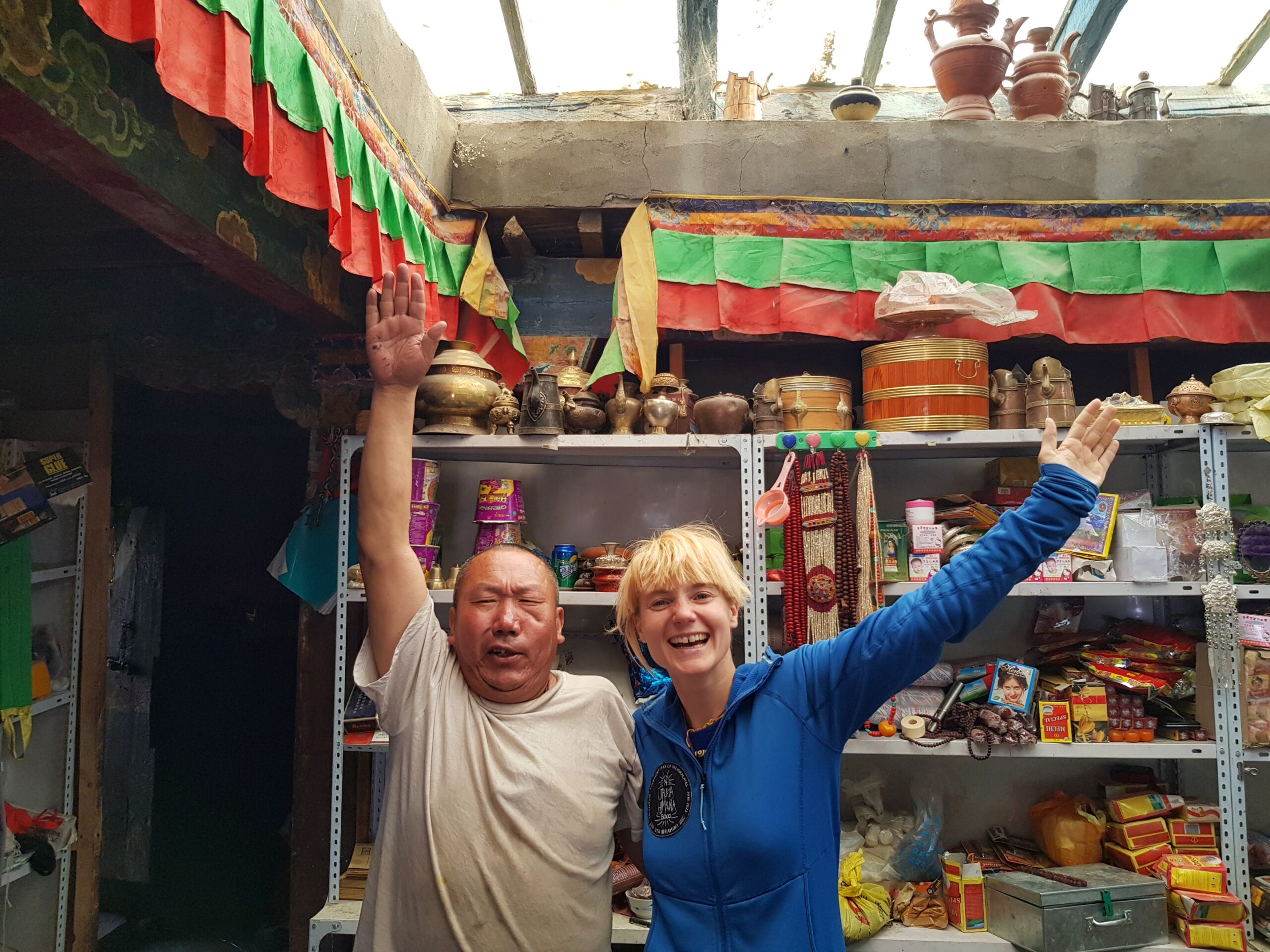 On September 4th, we reached the first base camp (BC) at 4900m. Here we stayed for two days and did some hikes for a few hours, 500-600 meters hiking on a hill for better acclimatization.

On September 7th, we reached the middle camp (5200m) and spent one night there.

On September 8, we reached the final Base Camp or Advance Base Camp at 5700meters altitude.

We did a lot of work to find a good spot for our tent. After so many days, I finally felt like I was home again with my tent, my gear, and being in front of Cho Ouy was so much better than being in any village. Setting up the tents, organizing everything for ourselves, meeting other people, and walking up and down every day—this is more or less what we did for a few days.

The last day before my rotation, we had a big Puja (prayer for respect and safety).
As always, this is another very important thing that we do. We don’t go into the high mountains without praying and asking for permission. Now, because I am climbing often on the Himalayas, Puja means a lot to me. I didn’t quite understand what the ceremony meant on my first expedition, but now I would never go up without having my daily dosage of Puja, because it helps me prepare my body and soul for the next phase.

During our praying, Cho Ouy was shining. I felt the beautiful and pure energy this mountain emits. They say that Cho Ouy is a girl and the name in the Tibetan language means the Turquois Goddess. You feel that energy. It is a very welcoming mountain. We felt only love and good vibes. 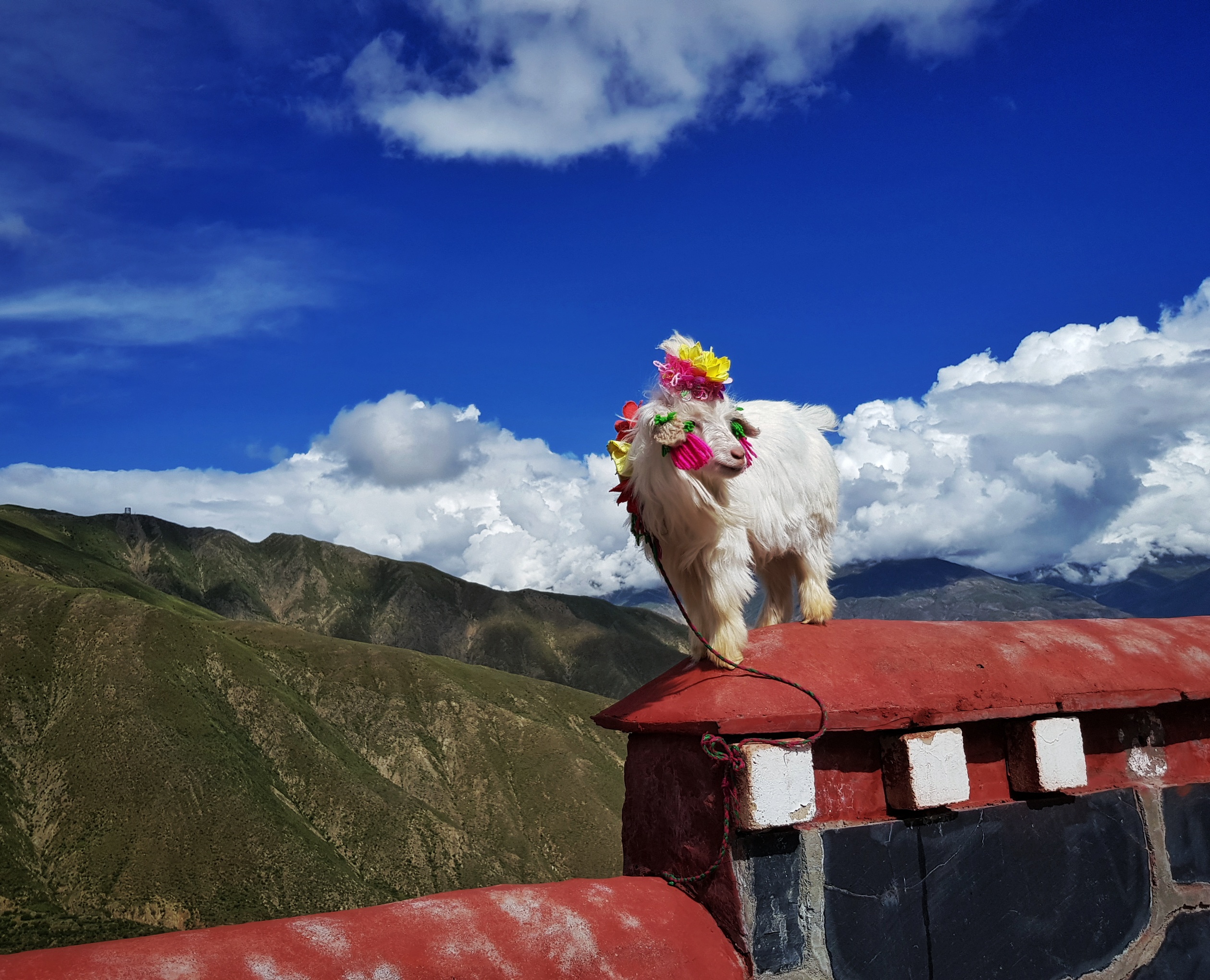 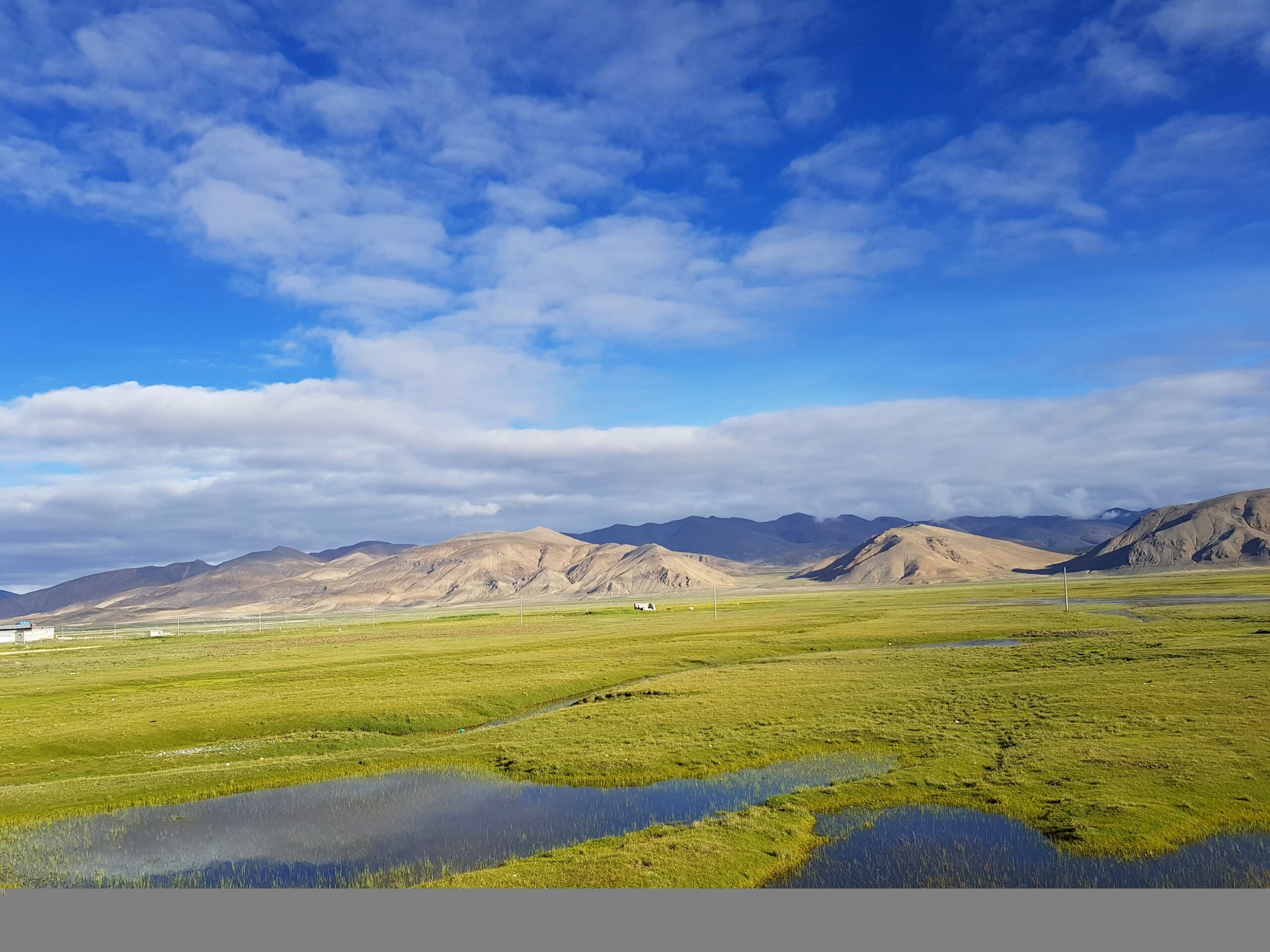 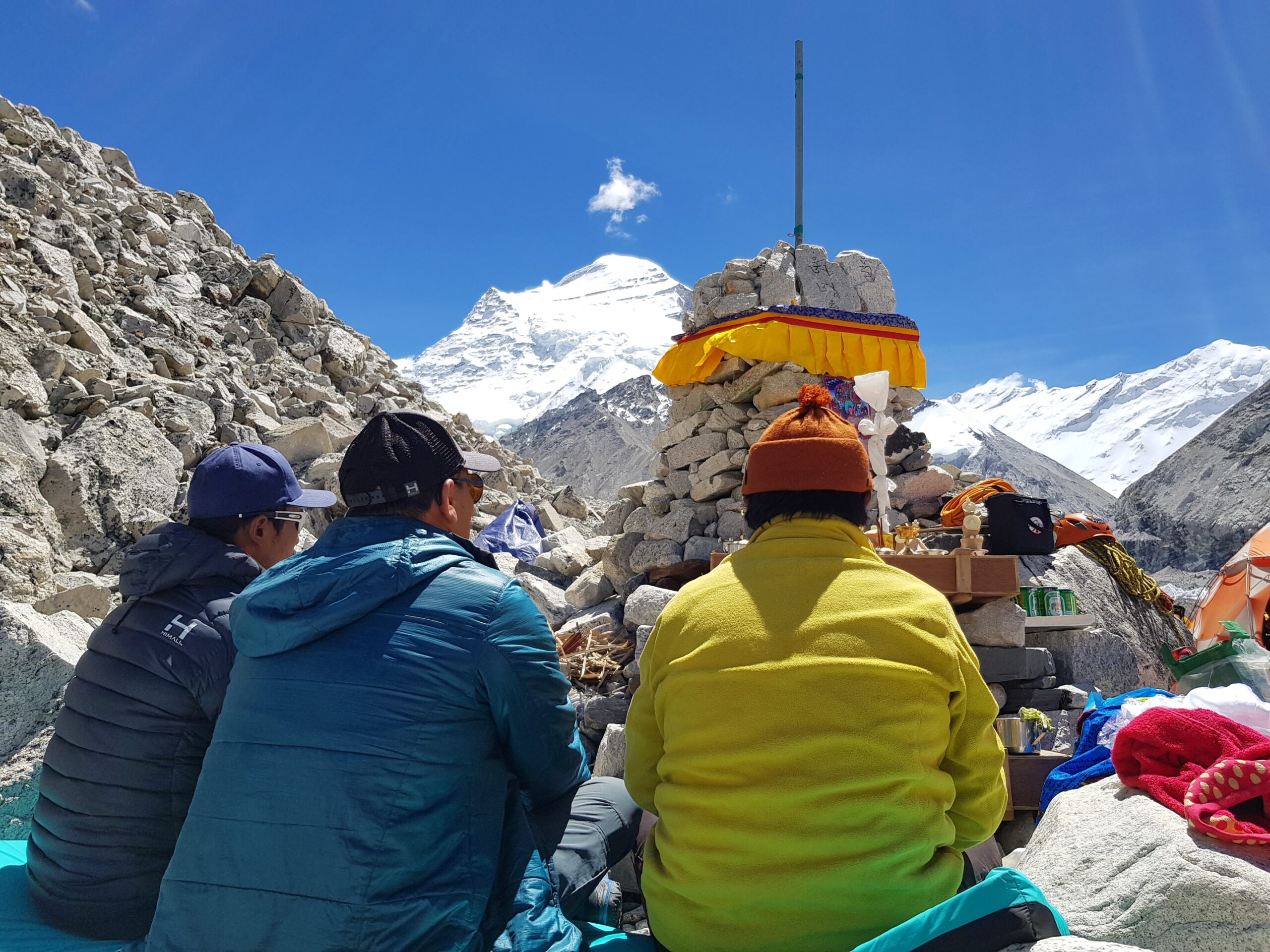 On September 10th, I went first at Camp One (6400m). It took about four hours and 15 minutes to reach C1, which was quite fast. I walked this time with a Sherpa. My idea was to carry some of my gears and leave on C1 instead of having another day rest. And it was good—even though it was so fast that I felt a bit strange when I reached the camp.

I took a day off to rest and on September 12th, I started my rotation to Cho Ouy. Again, this time, I carried half of the other gears, and more or less I had all that I needed for a few days on C1. The next day, I did about 600 meters of climbing on the way to C2 and slept again on C1, and by this time I slept 2 days on C1. I went down and the second rotation I joined the team from Mountain Madness: Osi with Carlos and Alex.

We did our second rotation for 3 days: Sleep C1, sleep C2, and back to BC (September 17, 18, 19). This was the last rotation. We slept and rested on C2 (7200) quite well. We decided that we didn’t need to spend more time up and also the weather wasn’t good, so we went down to BC and now waited for a summit window.
During these days, everyone is a bit nervous and stressed. We were all waiting for the summit window. We all want to get the summit first, finish as soon as possible, and be back safe. 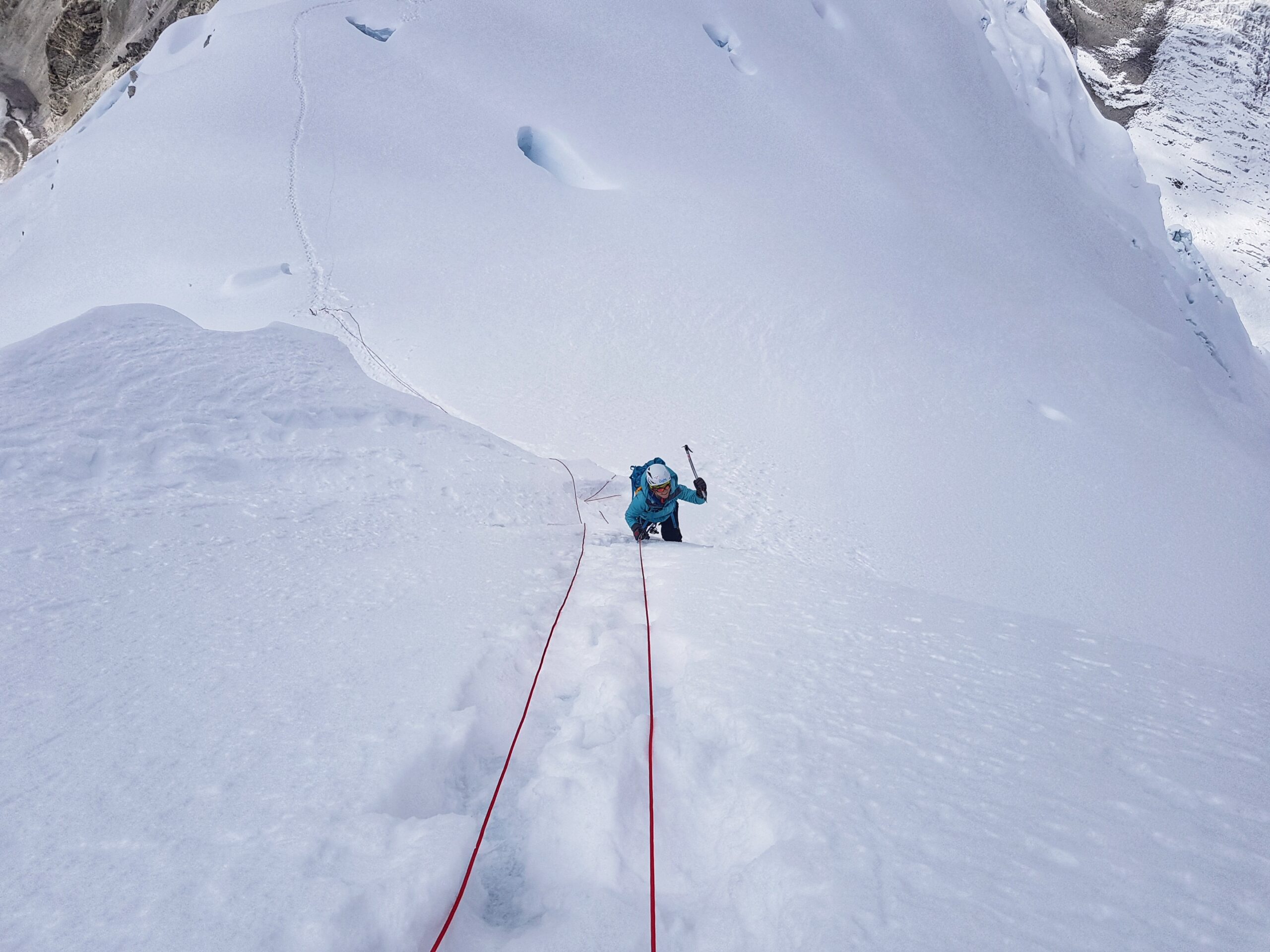 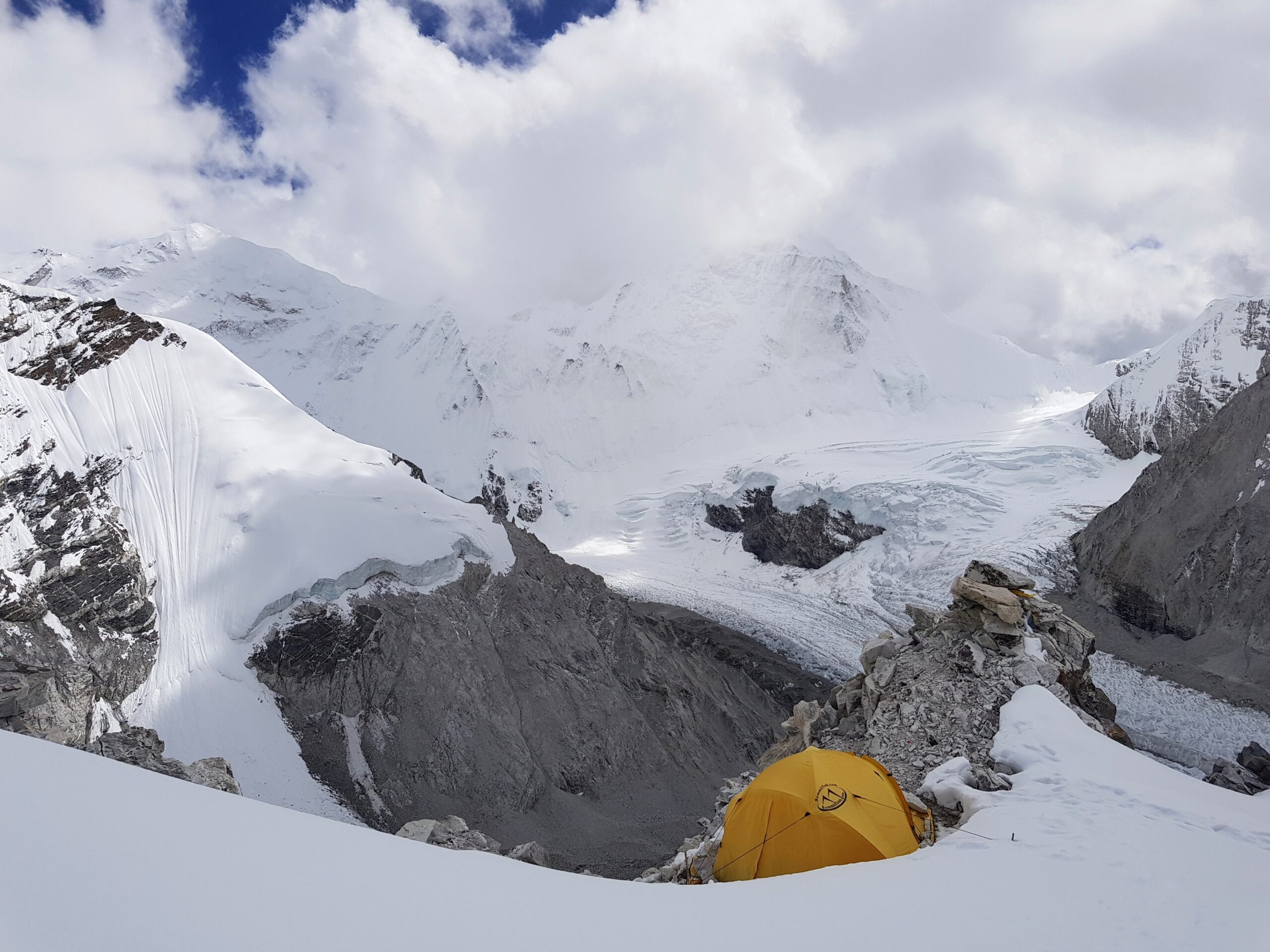 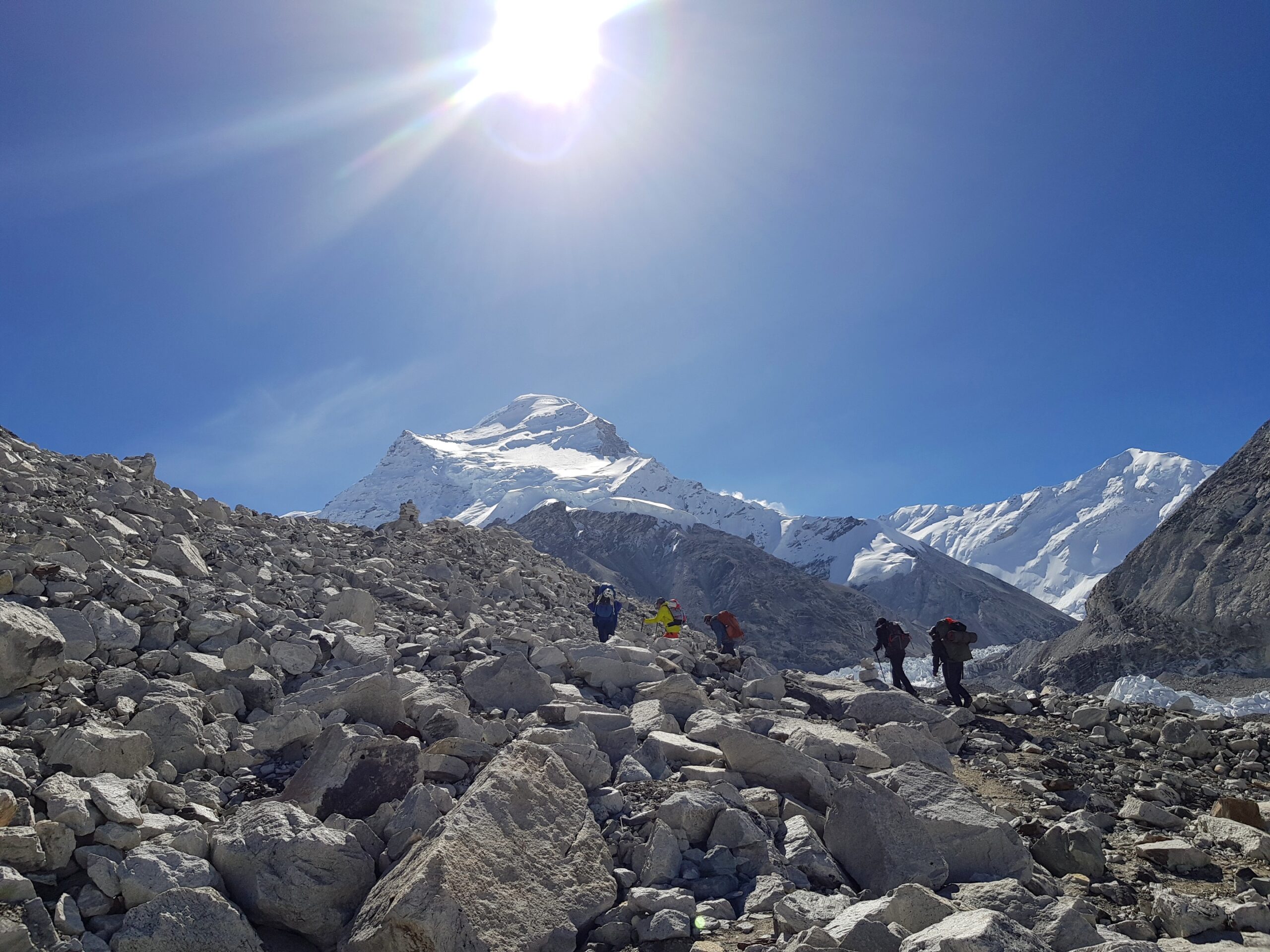 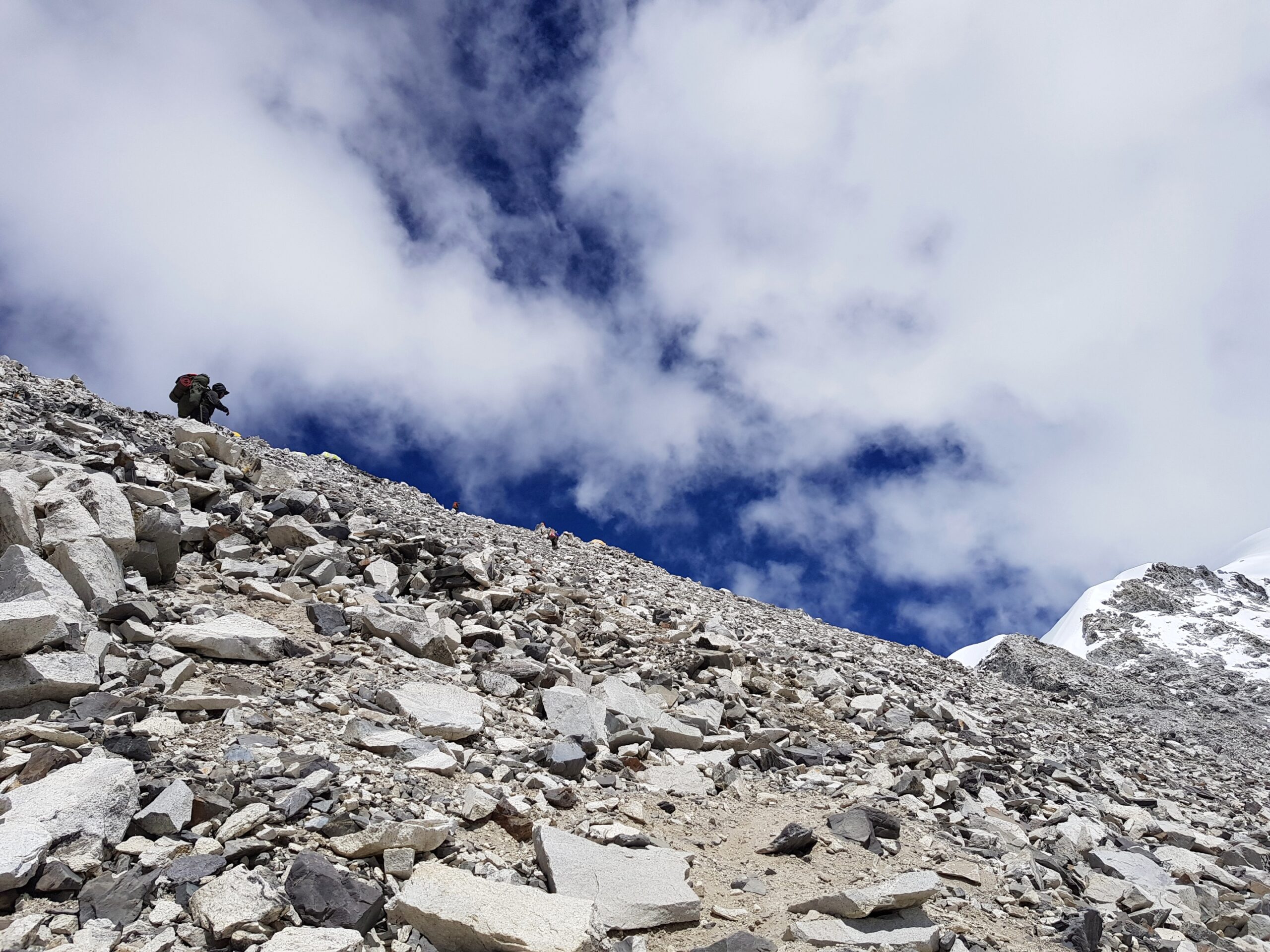 During our waiting, we played cards and we had long conversations about different topics—mainly about our family and friends. We walked for a few hours every day … so we don’t get tired and or become lazy. After checking the weather, Osi and Tendi, the two head guides from two different companies (I was lucky to share BC with them), decided about the date of reaching the summit. The good thing about Cho Ouy was that we never had to start climbing at 3 a.m. unlike the other peaks. There was no Khumbu and no danger of any seracs falling.

We started our summit push September 21 – 23. On the first day of Base Camp, we went from 5700m to C1 at 6400m. Only walking up and down on rocks takes around two hours, and we reached an altitude of 150 meters. After that, there were two big, steep sections—with about 550 meters of altitude gain. Normally, you don’t need more than four hours to climb on a day like this, but since the date of reaching the summit was postponed and my bag were heavy, I went a bit slower, so I could also stop and talk with people, enjoy the view, and not get tired. 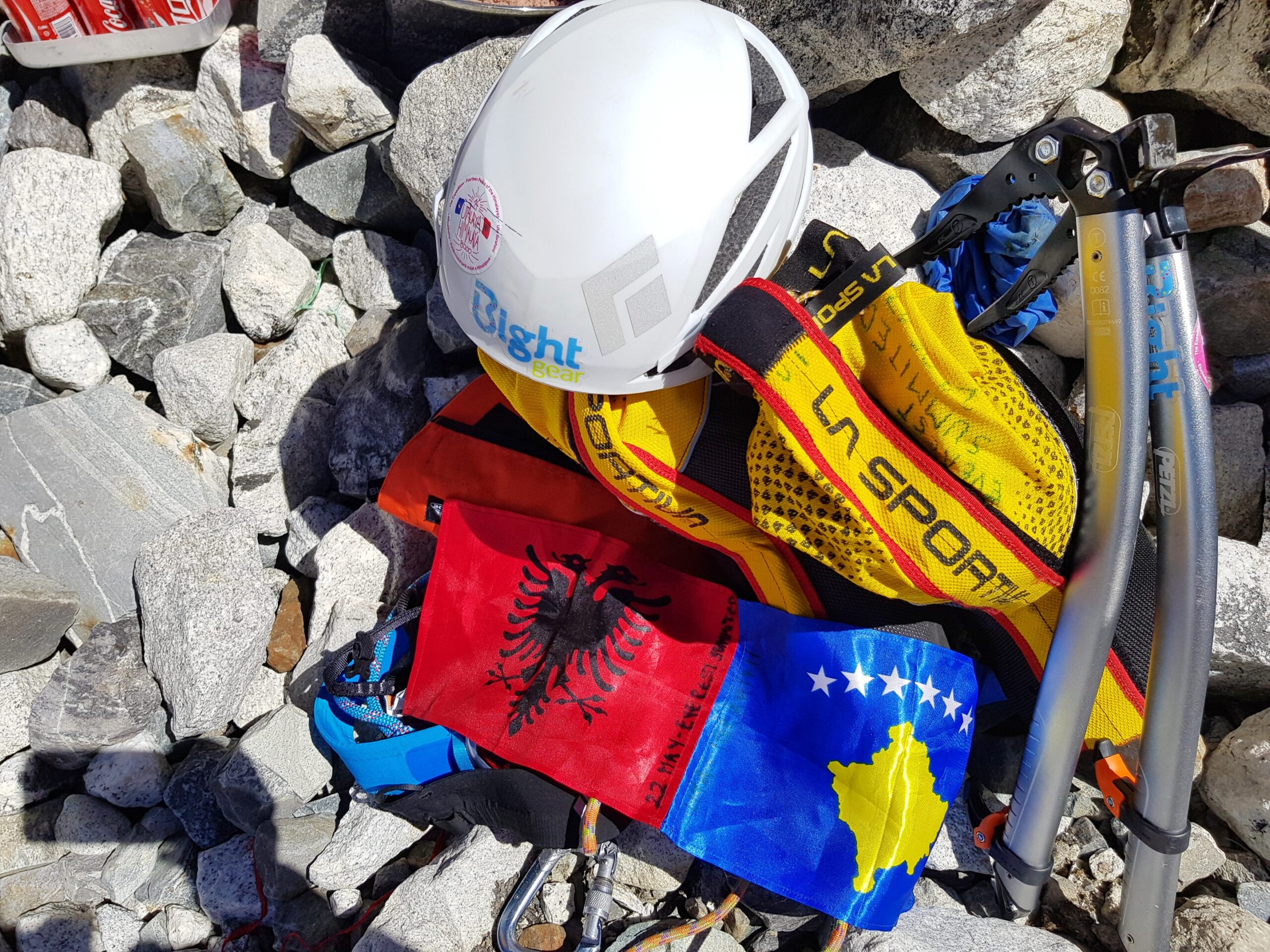 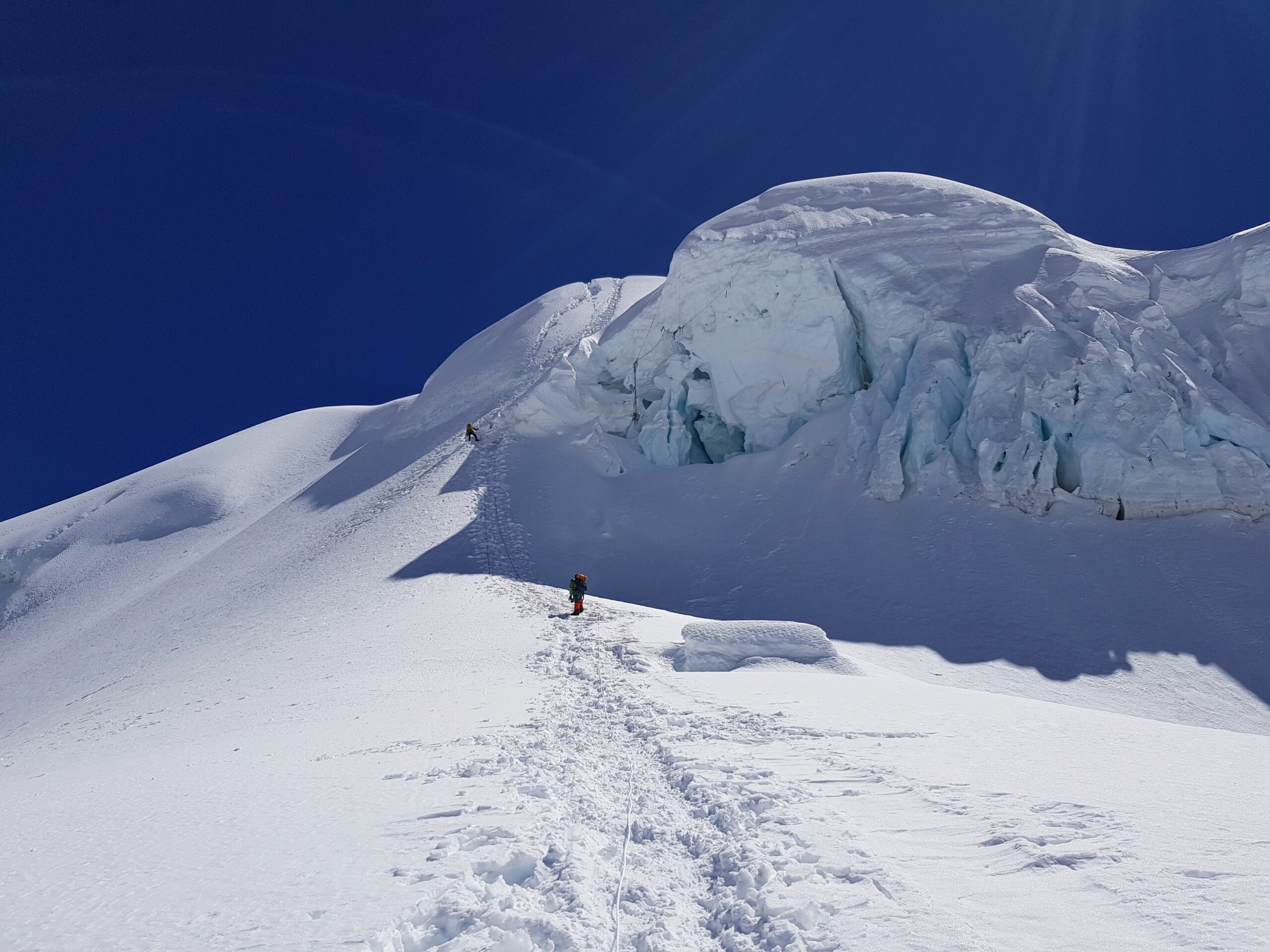 September 24th was a long day. From C1 (6400m) to C2 (7200m), there are two big, steep climbs. One, at 6800 meters, was around 30 meters of vertical climb, which was easier than the first rotation because now the steeps had a flat part before another 100 meters of very long steep sections. The day was five or six hours of slow going but we, me and Sherpa, were still fast compared with others on the mountain. This was also my favorite part of the climb.

The view of the mountain was always amazing on all sides, whenever I turned my head there was something amazing to see.  Nonetheless, it was a challenging climb and I felt the lack of oxygen more and more.

The night at C2 was always not as much fun. You don’t sleep well at this altitude. Some people use oxygen, but I really wanted to climb this mountain without supplemental oxygen so I didn’t use it while in the camps.

September 25, the third day, was a short day with a climb from C2 (7200m) to C3 (7450m). Not all people use C3. Most of the teams started the summit push from C2. Our team, though, was tried without oxygen, so we decided a different itinerary.

C3 is a very narrow spot. Not really enough space or time for anything. From here, we took a few hours rest before the summit push. 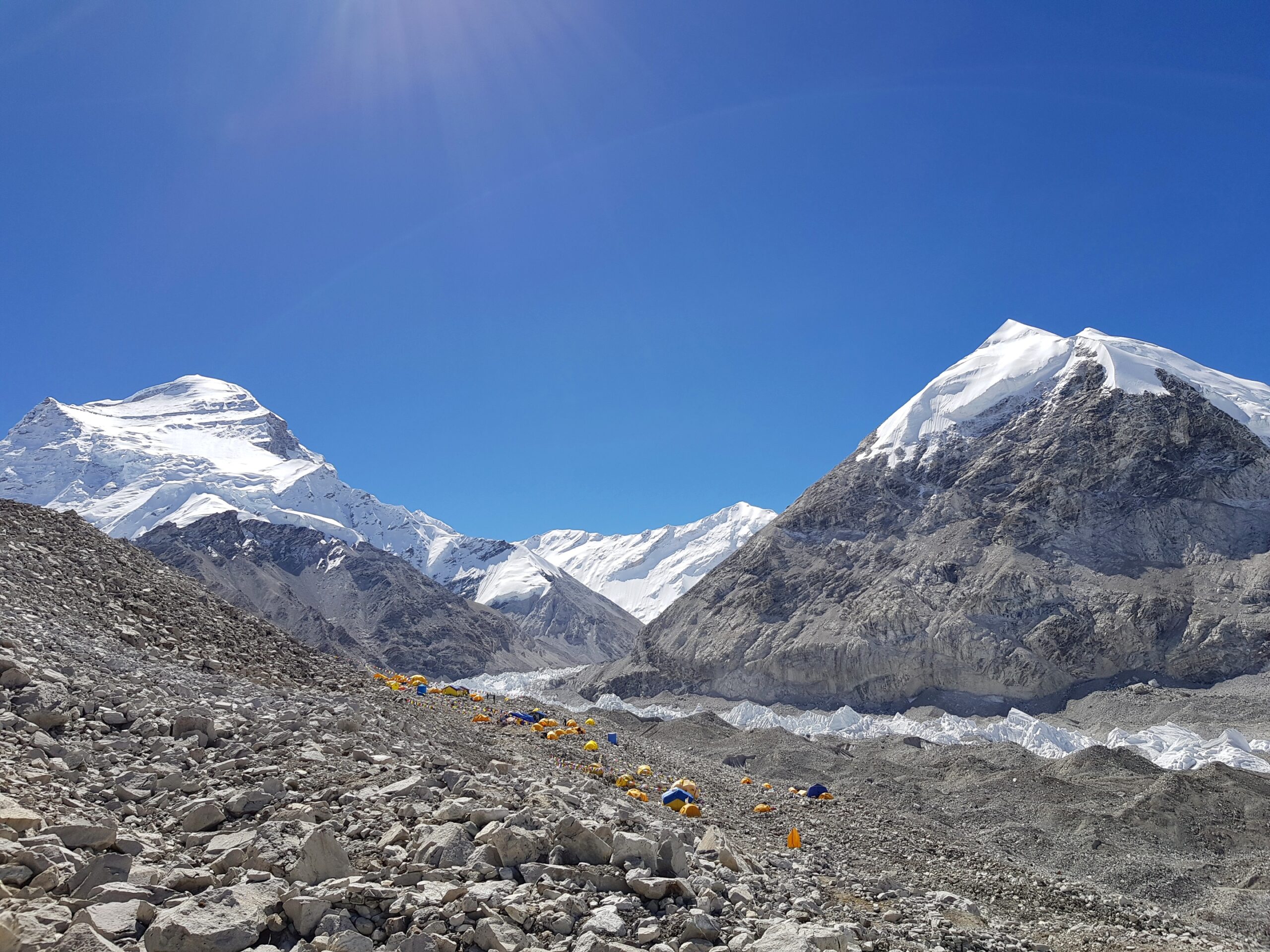 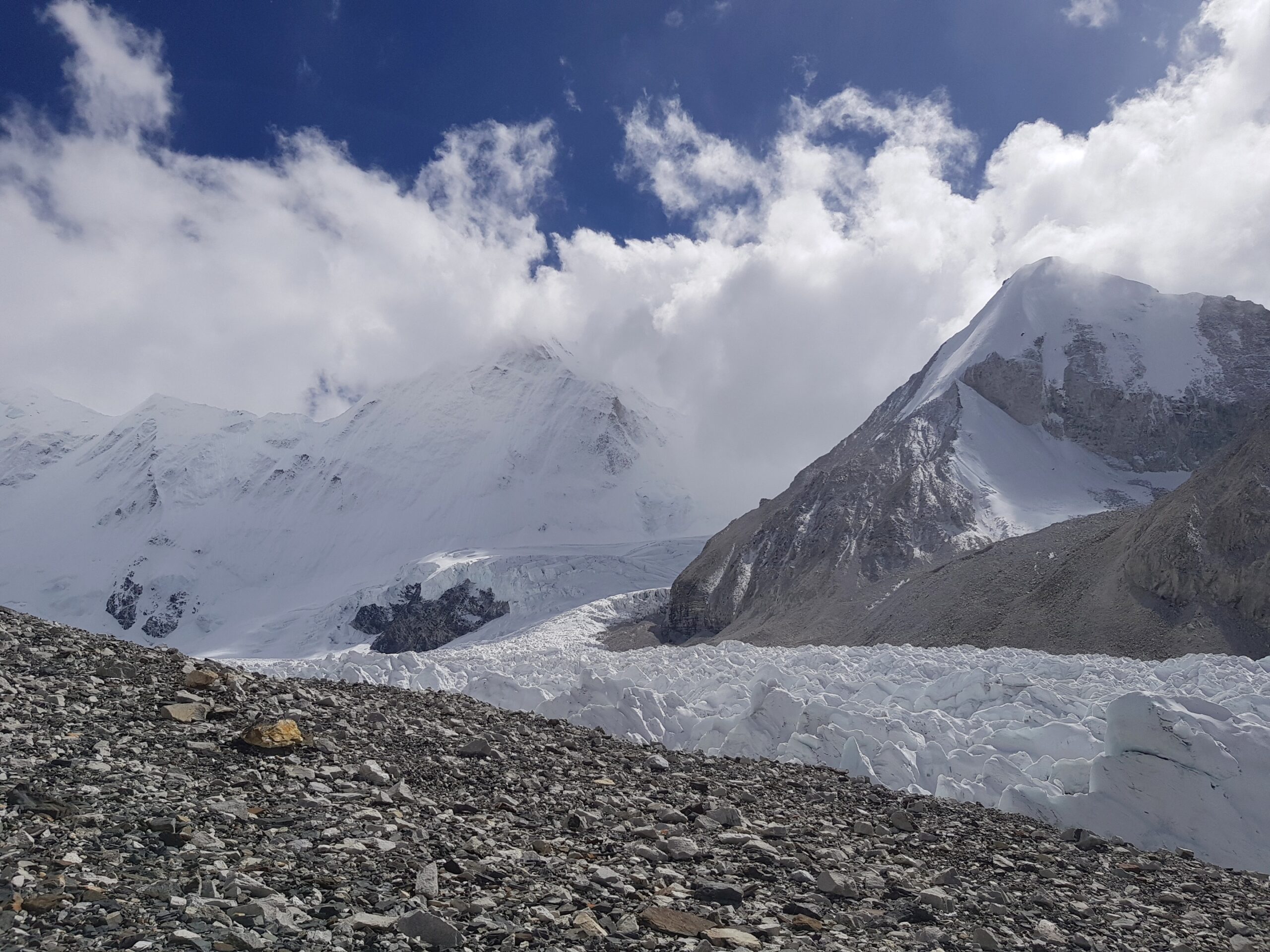 We all left at the same time. On our team, there have been Osi, a mountain guide, with his 2 clients: Alex and Carlos and another Local Mountain Guide, Lambabu Sherpa, and me, with a local climbing Sherpa, Dendi. It is always a bit of stress before I leave for the summit. I have to be careful not to forget anything I need to boil water, eat well, drink a lot, and relieve myself so we don’t need to stop while we climb … and then everyone is doing the same at the same time. I always want a bit of quiet time but never get it .. so I always end up leaving in a hurry. 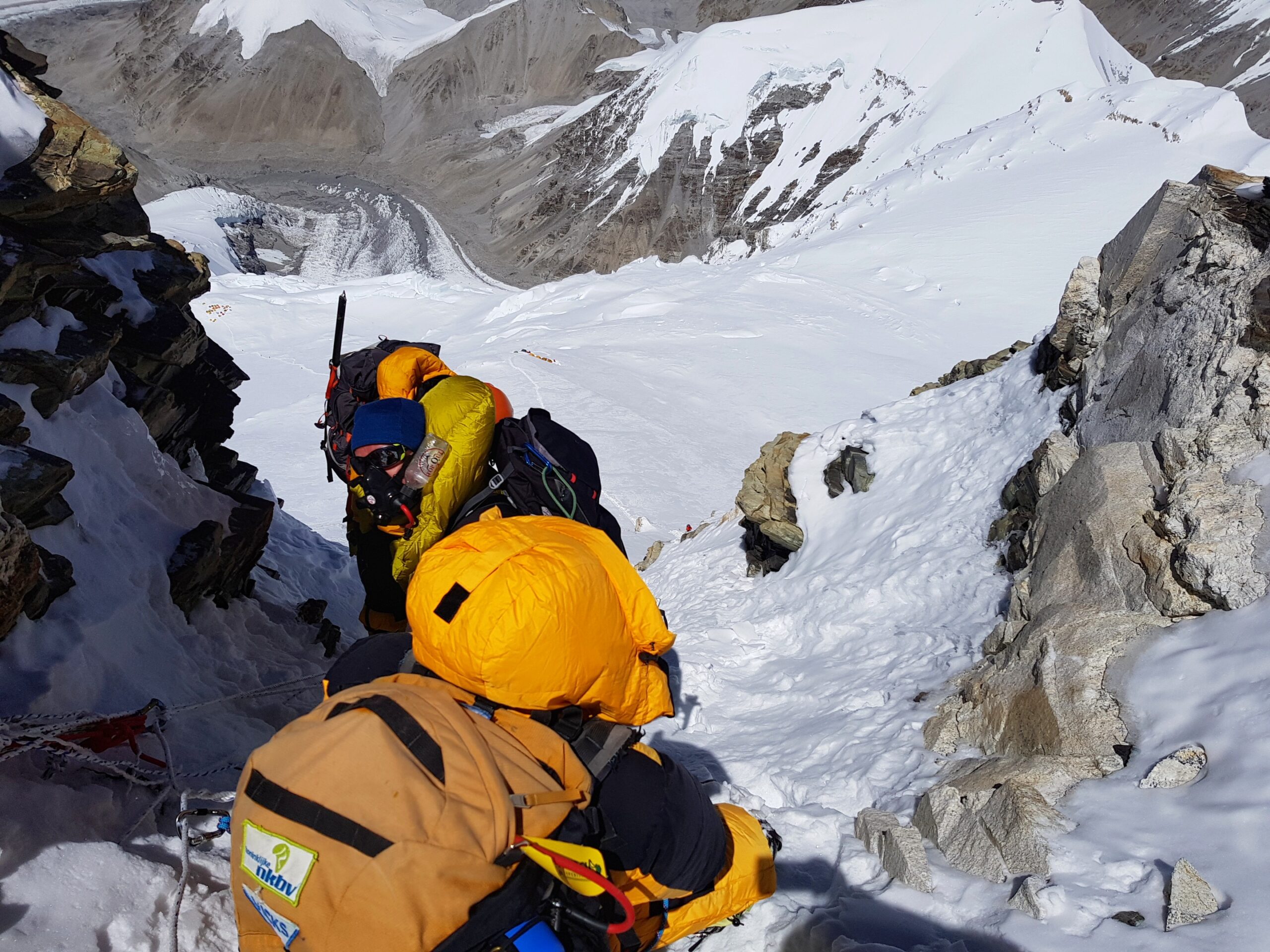 I put on crampons and harness, double-checked all the gear and bags, and slowly start walking. We left around 1:30 a.m. I felt super strong and was easily climbing without oxygen. At 7,750 meters, one hour into the climb—just before the Yellow Band, where the technical part of the climb starts with rocks and ice and a big couloir—I had to stop. I had the feeling that all my body was freezing … the fingers on my right hand and my left arm. It wasn’t cold but it was a bit windy. I started to panic. I thought I was having frostbite so, I didn’t want to risk it and I decided to use oxygen until sunrise. Sherpa was happy about that. It was less weight for him (since he had been carrying my O2 bottle).

I put on a mask, but I felt something wasn’t working. However, I trusted my Sherpa and I kept walking. He said my flow-rate is on 1 and he adjusted it to 3. I was so worried and not happy with my pace. Normally, I fly when I use O2 on 1 and this time, I was using on 3 and I felt tired and not very strong. I thought perhaps something was wrong with me, or maybe I am not strong enough or maybe I even thought I should stop this project and go back home. I thought perhaps 8,000-meter peaks were not for me. Something was really wrong.

Plus, I still kept feeling so cold. One hour before the summit—almost sunrise—I stopped to drink water and investigate the problem. I checked the O2 and I saw the flow rate was 0.3 and Sherpa thought that it was 3. Normally, climbers sleep on 1 and walk on 2-4. I was walking at 0.1 – 0.3, which means that the mask actually makes it more difficult. That was the hardest and the worst thing that ever happened to me—on any of the expeditions. I cried and shouted and I took my bag and left my sherpa at the back.

I reached the summit 10-15 minutes after the other part of the team … I was crying and angry about what just happened to me. At the same time, I knew I had to be realistic. I was fortunate to be doing something I love. I was also happy that there was nothing wrong.

Having said that, I didn’t really enjoy the summit this time. I was so happy on this mountain all the time, and the energy was always kind to all of us—but I was sad at the summit. After a few minutes at the summit, I saw Everest and Lhotse, and many more peaks around, I felt happy and full again. 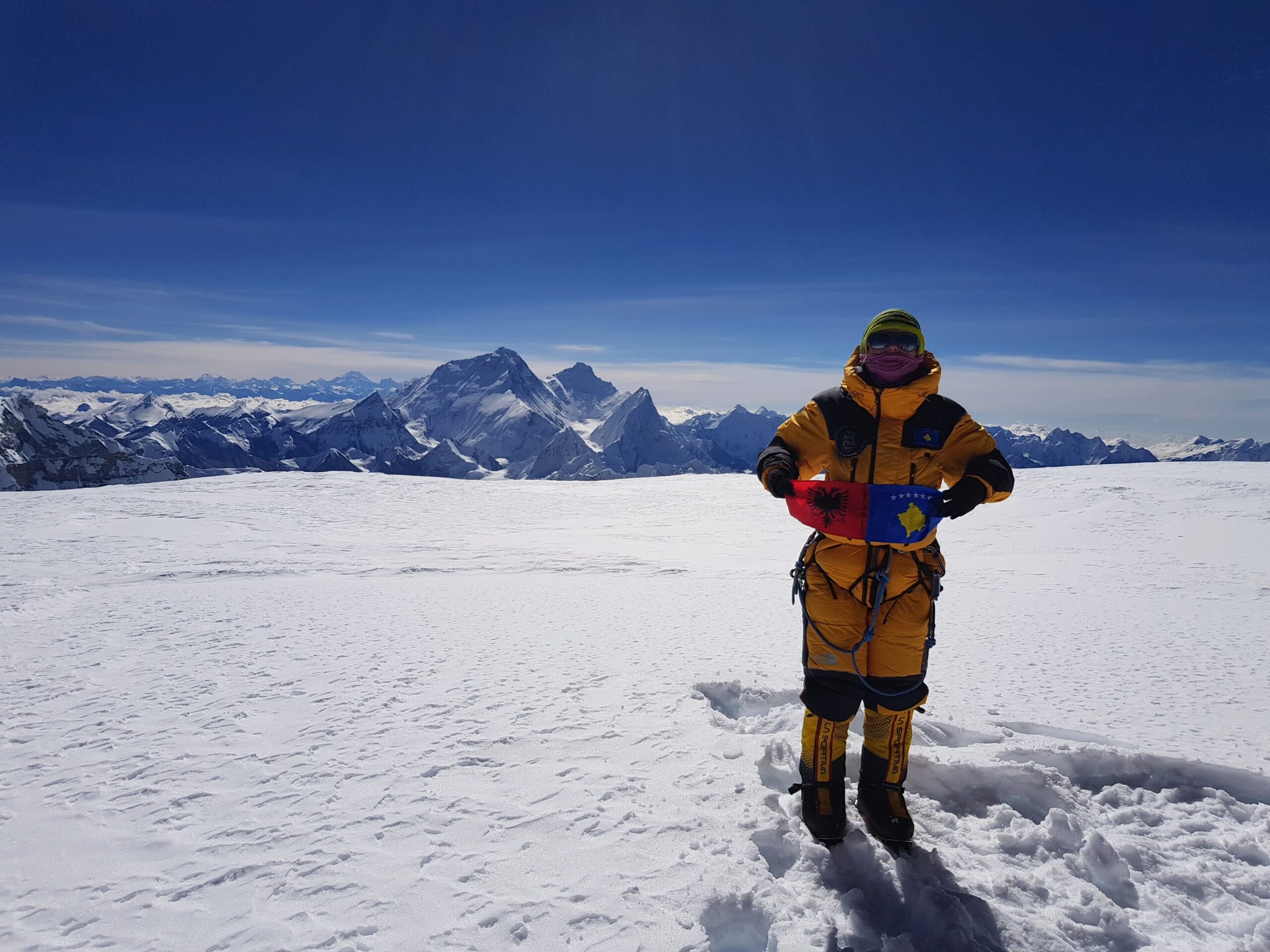 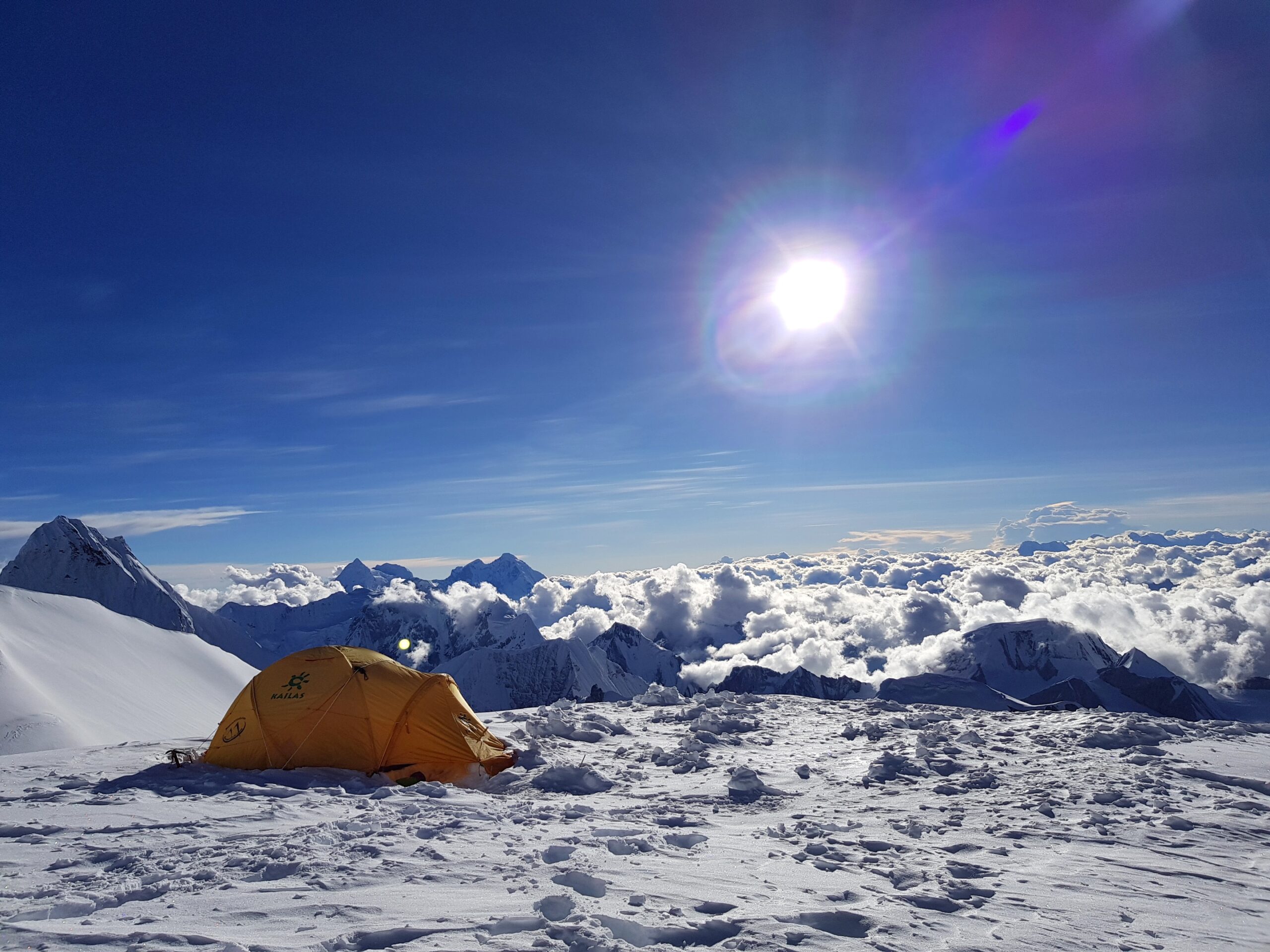 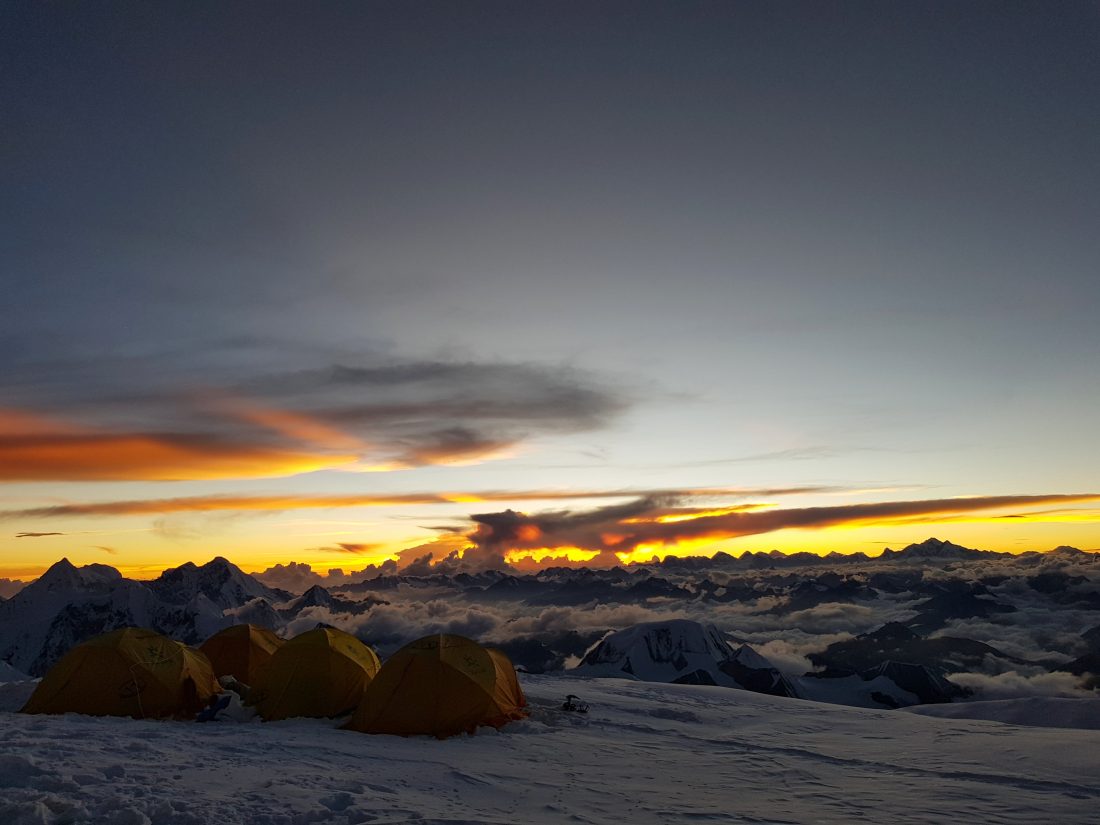 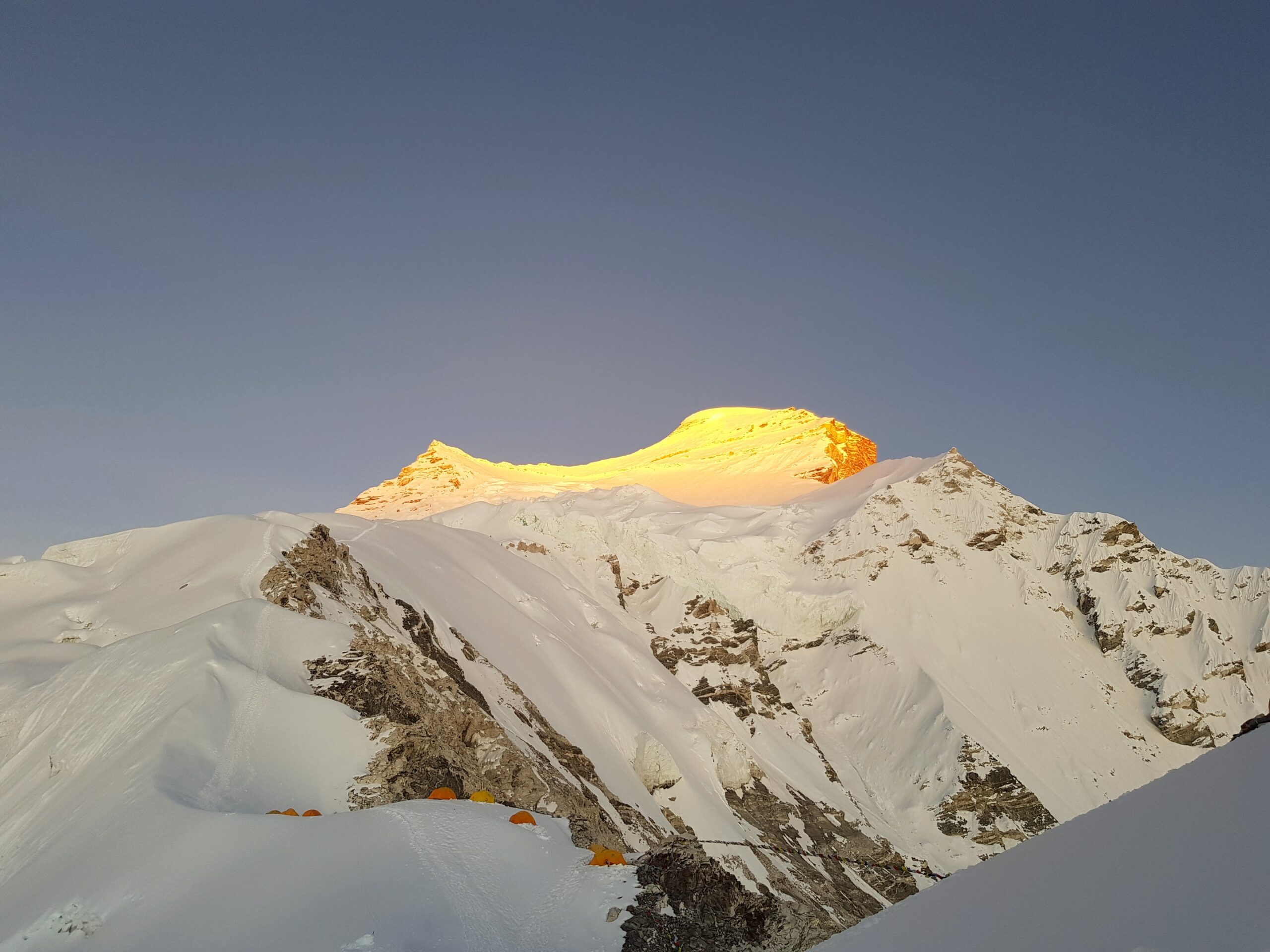 When I reached base camp, I sat and thought for a long time. The journey is always different. I know this, but then again, I am always discovering new aspects. I summited another 8,000-meter peak—a process that takes months of training—but the moment of realization, exhilaration, internalization, frustration, and love all happen in a flash. 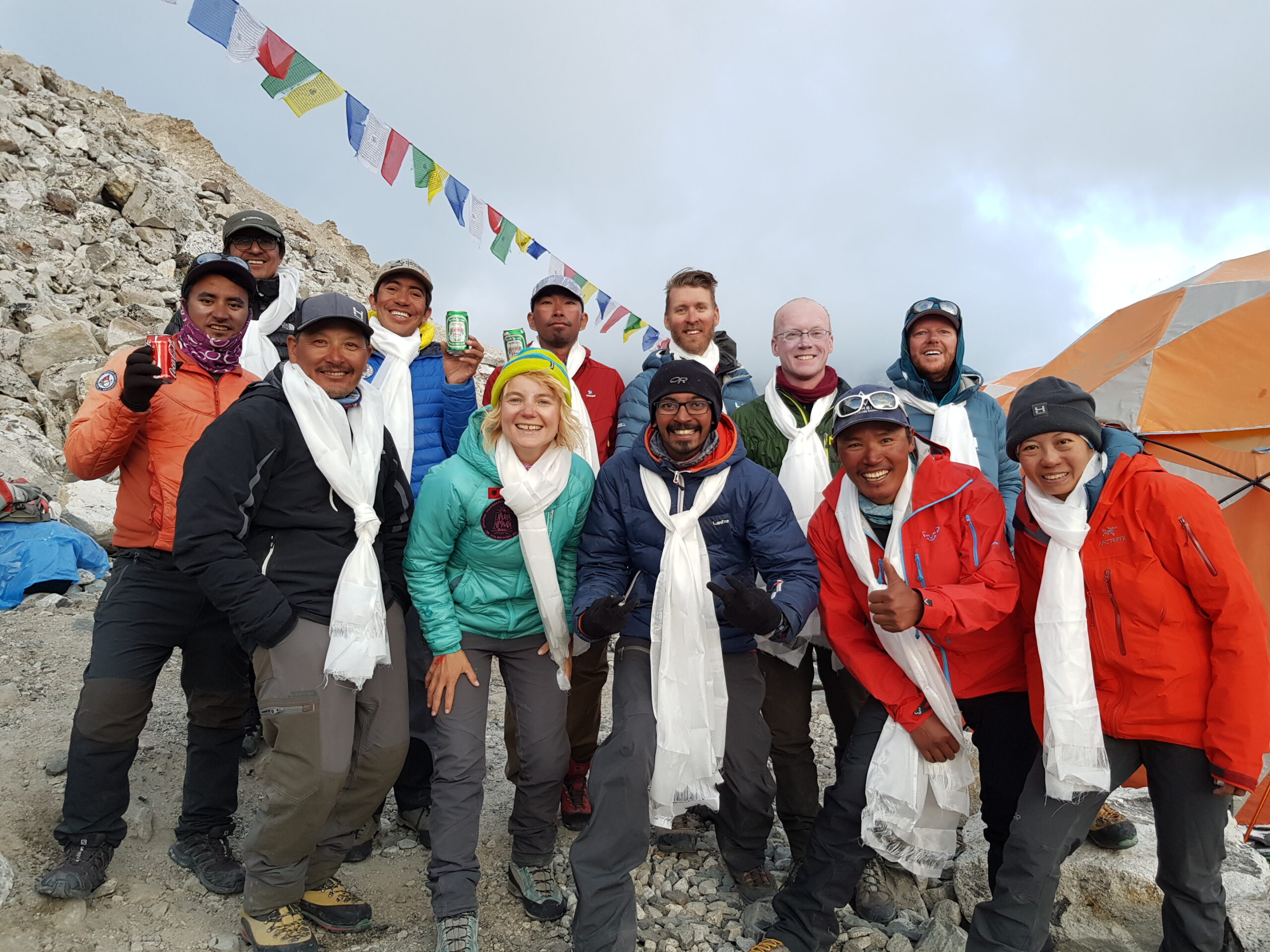