I never thought I’d write this: I came back from Dhaulagiri, empty-handed. It is the first expedition from which I came back without reaching the summit and I admit that it is not what I wanted. Surprisingly, the feeling I had when turning back equals the same feeling when I reach summits. Going to the top of the Himalayas, is coming back safely. Returning home, to my loved ones, is something I cherish more than all the summits I have climbed so far. Challenges are beautiful, they keep me going, they make me grow mentally and physically stronger, the joy of summiting mountains is limitless. Yes, successes make us happier, but “failures” make us want to appreciate life even more. As I’m slowly coming back to life, after arriving to Prishtina from Kathmandu – resting, eating well and meeting friends – I want to share with you bits and pieces of my experience and progress of the Dhaulagiri 2022 expedition.

Dhaulagiri peak (“white mountain”), located in the Himalayan massif, is the 7th highest peak in the world (8,167 meters above sea level). Climbing this peak is done only during spring and autumn, and I choose autumn. From the first day when I reached the base camp, there has not been a single day without heavy rain or snow, making this expedition quite challenging to begin with.

On September 8, after 10 hours on the road with a 4×4 jeep, we arrived in the village of Marpha where we stayed for the night, where I also meet all the other members of this expedition. Tomas from Slovenia, Gabriel from Romania, David from Italy, David (skier) and Vedim from France, Jollanda from China, and then latter Zura from Georgia, Aram from Iran, and Dorota from Poland joined the expedition.

On September 9, after packing and organizing food, we started walking towards the Base Camp (BC), where we spent 2 days. The base camp is located at 4,700 meters above sea level and faces this huge, steep stone massif, where everyday there rocks falling and snow as well.

Camp 1 in Yak Kharka and Camp 2 in Hidden Valley, with two high passes – the Franch Pass and Dhampus Pass,  with 5,200-5,300m altitude. Not taking time to acclimatize, not even for very short shakes, made me weak and tired, resulting in altitude sickness.

From September 12th to September 21st, we could not start the process of acclimatization due to heavy rain and snow, and avalanches. We managed to find some “safe” windows of opportunities, and did some sort of acclimatization by hiking along safer paths around the camp. During this time, we faced difficulties in transporting food, ropes, tents and food required for our push to the high camps. We waited for better weather so that we could continue.

On September 21, finally, after 9 days of waiting, we started the first acclimatization towards Camps 1 and 2. Camp 1 (C1) is located at 5,700m above sea level and it usually takes no more than 4-5 hours to reach the camp, meanwhile on the first rotation it took us approximately 8 hours to reach C1 due to deep snow. The transition from Base Camp to Camp 1 was the most dangerous part of the expedition: the path is littered with stones and some deep bed (cracks of the earth) with a 40-50% ascent grade. We were also exposed to heavy snow, falling rocks, waterfalls, or avalanches. After passing this part, the path then continued on rocks and snow and then only snow and beds. Although the difference in altitude was not very big between these two camps, the length in kilometers was large, especially climbing in that harsh terrain.

On September 22, we continued to Camp 2 (C2) at 6,300m above sea level. This path was mostly with easy climbs, not very technical nor dangers. The first two nights of acclimatization went well, despite not a lot of sleep, but at least we were not in danger. After 3 days we returned to the Base Camp, for rest, provision of food and waiting until the next attempt to climb to the top.

While we were waiting for the weather to allow us for the “Summit Push”, we started getting reports of accidents and avalanches from Maja Manaslu: never-before seen enormous avalanches. Also, during conversations with Sherpas and other climbers, they understood that the situation with the falling snow and danger of avalanches, of the changing weather, the situation is very different from last year. The same unpredictable weather patterns were happening in Dhaulagiri as well.

On September 26, as it was a good day with the Buddhist calendar, we had 1 hour of sunshine. As is the custom before every “Summit Push”, I participated in the Puja ceremony – where each in our forms, pray for safety and wellbeing and a good climb to the peak.

On September 28, I set off towards the “Attempt of the Summit” – “Summit Push”.  The initial plan was to attempt the ascent on October 1st, but due to changes in the weather, the plan changed.

On October 1 we finally were at C3 (7,300m), where we planned to stay for a few hours and try to give a final push to reach the top. The route from C2 to C3 was mainly us climbing the northeast ridge (classic climbing route) – very technical, mostly steep at 45-55 degrees. During this time, it was constantly snowing and we had almost 0 visibility. During the entire ascent, small avalanches rippled through our legs, and when we were very close to C3 (7,300m) we were hit with a large avalanche. At that point I stopped for a short break with Aram (fellow climber from Iran) who was sitting and was secured on the rope. When the avalanche hit, I was lucky to be covered by snow up to my knees, while it covered Aram completely.

Because of the heavy fog and snow, and the high risk of avalanches, reaching the peak was not an option (despite having the rope-fixing team at the top and the stickers at the bottom). We could not see almost anything and were not sure how secure the rope that our life hangs from actually is. We feared that the avalanche cut the rope, making our ascent or even our descent life-threatening. After contemplating our options for a while, we saw that the rope fixing team had already started the descent (about 50-100 m before we reached C3). That’s when we realized that we had to start going down as soon as possible – which I did, and lasted 12 hours before I reached C2. The night in C2 was very long, with avalanches crashing all around and lightning strikes.

On October 2nd we had to descend to BC as quickly as possible, to avoid the increasing risks of avalanches and thunder. On the way down, I saw a ski team from France who were being flown from Camp 1 to BC due to the high risk of avalanches. We continued on, at top speed, with small avalanches hitting us from all corners. Later that evening, I arrived at the Case camp, where I had some food, got my body warm, packed, and got ready so that I could immediately move the next day. Then, I continued walking toward the village of Marpha.

October 3 trekked as fast as I could from BC to Marpha village (11 hours) a trail normally done in 3 days.

October 4 Moved from Marpha to Pokhara.

I was lucky enough to leave Base Camp and Marpha village at the time I did – many of my friends and people from the villages, including livestock, were surrounded by massive landslides. They had no way out, and they could not be reached. I felt for them and hope that they are all safe.

This was a good lesson. I will build from this and come back even stronger.

The mountain and the weather have spoken and I have listened. 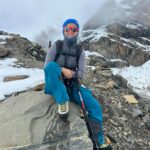 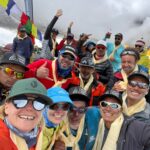 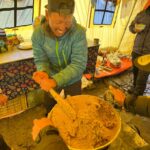 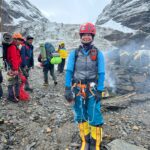 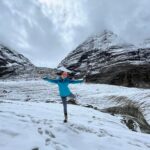 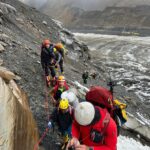 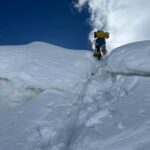 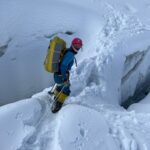