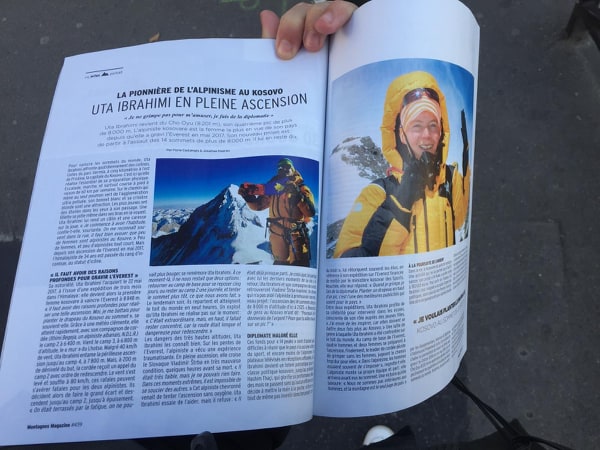 The pioneer of mountaineering in Kosovo – My interview on Montagnes Magazine

Uta Ibrahimi on the rise

“I do not climb to have fun, I do diplomacy”

Uta Ibrahimi returns from Cho Oyu (8201m), his fourth peak of more than 8000m. The Kosovar mountaineer is the most prominent woman in her country since she climbed Everest in May 2017. Her new project is to ascend the 14 summits of more than 8000m. She has ten left.

To defeat the peaks of the world, Uta Ibrahimi faces hills every day. Those of Germia Park, five kilometers east of Pristina, the capital of Kosovo. Here she carries out most of her physical preparation.  Climbing, walking, and especially running, 60 km a week. On the path that leads to the only green lung of the ultra-polluted agglomeration, its white cap and blond mane are attractions. The youngest have stars in their eyes as she passes. A little girl even throws herself into her arms when she sees her. Uta Ibrahimi gives her a hug and a caress on the cheek. «I’m getting used to, she says, smiling. I am often recognized in the street. It must be admitted that few women are mountaineers in Kosovo». Few women and few mountaineer anyway. But since she climbed Everest in May 2017, the 34-year-old Himalayan has gone from being an unknown to an icon.

«You must have deep reasons to climb Everest»

Her notoriety, Uta Ibrahimi acquires it on May 22-2017, after a three-month expedition in the Himalaya: she became the first Kosovar woman to conquer Everest at 8848m. «You need deep reasons to achieve such an ascent. I was fighting to plant the Kosovo flag at the top», she recalls. Thanks to a mild weather, she quickly reach, with his partner rope (Xhimi Begeja, an Albanian mountaineer), camp two at 6400m. Come then camp three at 6800m altitude, the “wall” of Lhotse. Despite 40km/h of wind, Uta Ibrahimi begins the perilous climb to camp four at 7800m. But 200m under the goal, the team receives a call from camp two with order to go down. The wind has risen and blows at 80km/h, these bursts can be fatal for the two mountaineers. They then decide to make the splits and go down to camp two, until exhaustion. «We were dominated by fatigue, we could not move, remembers Uta Ibrahimi. At that time, we had only two options left: to return to base camp to rest for five days or to stay at camp two for a day and to attempt the summit earlier, which we did». The next evening, they start again and reach the roof of the world in nine hours. A feat that Uta Ibrahimi does not realize immediately: «It was amazing, but at the top, you had to stay focused because the road to go down was long and dangerous ».

The dangers of very high altitudes, Uta Ibrahimi knows them well. On the slopes of Everest, the mountaineer had a traumatic experience. On the way up, she met the Slovak Vladimir Štrba in very bad condition, a few hours before his death. «He was very weak but I could not do anything. In these extreme moments, it is impossible to worry about others». This experienced mountaineer had just attempted the ascent without oxygen. Uta Ibrahimi tries to help him but he refuses: «He was already almost gone. I think that I shared with him the last moments of his life». On the way back, Uta Ibrahimi and his rope companion will find Vladimír Štrba inanimate. A tragedy that did not help the mountaineer to promote her new project: the ascent of the 14 peaks of more than 8000m of altitude by 2025. «Many people in Kosovo told me: “Why would I give you money? For you to die on a peak ?»

Those funds for “14 Peaks” are even more difficult to meet, as the country has no culture of sport, and even less mountaineering. From television trays to official receptions, Uta Ibrahimi becomes a patriotic totem for the Kosovar political class, including President  Hashim Thaçi who glorifies his performance. But months go by without any official decides to put a hand in the pocket: «We are not going to invest in your project, it’s a hobby», the deputies often say, in reference to his expedition on Everest half funded by the Kosovar Ministry of Sports. Annoyed, she answers them: «When I climb, I do diplomacy. Planting a flag at the top of a peak is one of the best publicities for the country».

Between two expeditions, Uta Ibrahimi takes advantage of her celebrity to intervene in schools, aware of her role with young girls. «I want to inspire them because they have to fight twice in Kosovo». A gender struggle to which Uta Ibrahimi was confronted even on the roof of the world.  At Everest base camp, four men and two women prepare for the climb. Finally, the roped leader decides to climb without the women, judging the way too hard for them. «In mountaineering, men often try to impose themselves», she regrets. The mountaineer organize her own team and leaves: she will arrive before them at the top. «We are not inferior to men and the mountain is the only justice of the peace».

In life, the Kosovar is a mountain guide. An activity that does not allow her to self-finance her project “14 Peaks” which she estimates around 150,000 euros. To break the deadlock, Uta Ibrahimi resigned herself to accepting the money from the politicians, including that of the Deputy Prime Minister. A series of sponsors followed. Formerly shunned by the equipment manufacturers, “Salomon” and “BightGear” are finally interested in her. These chain supports allow him to raise funds to climb the Lhotse (8516m) in may 2018 and Cho Oyu (8201m) last september, respectively the fourth and sixth highest peaks in the world. However, during these expeditions, it’s all about saving money: «Now and unlike Everest, I carry my equipment and food myself. And I use Sherpas only in the last few meters». At the whim of the summits, she sharpens her style, and attempts climbs without oxygen, for a more refined climb. «On Cho Oyu, because of the cold I had a frostbite. I finally climbed with oxygen from 7750m, to finally get rid of it when I got to the top».

She has yet ten peaks to climb, whatever the cost. Next year, she intends to remove two more from her list. Which ones, she does not know yet.