On May 22, 5:05 hours, I saw the Earth completely different. Unlike what we see and imagine every day. The more I drew closer to the top, the more relaxed, beautiful and majestic it became. I saw the color of people and flags. That made me realize I came to the top. I will never forget the first rays of the sun that embraced us that early morning. Although the temperature was minus 40 degrees Celsius, we had the impression that it was very warm. The Earth’s horizon was shaped like a curve. We had left the clouds down below, way below. I will always keep this moment to myself as the most beautiful thing in my life.

Climbing the Mount Everest, to the highest peak on Earth was not just my personal climb; it was the climb of the first Albanian and Kosovan woman. This achievement was sought with much effort and sacrifice, not just because such expeditions are difficult and expensive, but because in our country mountaineering is at an early stage, and especially for women.

My career as a climber started on May 22, 2011, when I joined a group led by Bashkim Mula and his wife Dita. I was surprised and very happy when I saw that there were also women in the mountains. At that time, most of the mountaineers were men, while the presence of a woman made me realize that a mountain is also a place for women. That made me move on. For the first three years, I hiked every weekend, while in the next three years I started to add on the hiking dynamics and intensity. I started climbing the mountains in Kosovo and Albania, and in Europe and Asia. Then I started challenging myself with the most technically toughest peaks and higher altitudes.

The year 2016 was the turning year. Different people had refused me to climb on high peaks precisely because I was a woman, namely “weaker” to cope with climbing. It was XhimiBegeja, from the Dajti association, who chose to represent “Albanian woman in Himalaya”. In September 2016 I started intensive training. Every day I jogged and other endurance exercises; I climbed to peaks every weekend, I followed food and sleep regimen. I went to the first Himalayan expedition, where I managed to climb three high peaks: Ramdung 5700, Nurbu 5800 and Ramdung 6000. After returning from this 40-day expedition, along with the expedition leader, XhimiBegeja, we decided to go ahead with climbing to the Everest Peak.

I had doubts; I had little support from family and friends. They were afraid whether I would be able to return from the top. The most frequent comments were “What, you’re a woman and going on your own? Aren’t our peaks good enough for you, why are after the Earth peaks? Why don’t you get married and have kids?” The comments continued for a while, but as closer as the departure date for Everest got, people, started understanding my seriousness and perseverance for this expedition. My closest people began supporting my dream. The others continued with rumors. These challenges became the catalyst of my journey towards this success.

I departed from Prishtina airport in early March. Many hikers and citizens escorted me there. I broke down in tears. I believed in my dream. When I said bye to Mr. SkenderSina, President of “Pashtriku” Mountaineering Association from Gjakova, member of which I am, he told me: ‘Uta, we want you to return with a victory. You will make it. These words and many others have given me the courage whenever I felt weak during the expedition.

My expedition took about two months and a half. I started in Hinku Valley with the Jordanian women team preparing for climbing at Everest; I continued with the Swiss expedition in the Makalu region (north of Nepal), and on May 8th I continued at Everest Base Camp. The journey to this point was very difficult and with a lot of challenges: from a toe injury to the collapse of the mountain that put my life and my expedition at risk. I had moments when I felt weak, bored, and shattered, but I tried to overcome them by singing and dancing and spending time with Himalayan locals.

On May 9, 10 and 11, I made the first climb at Base Camp, 5300m, then Camp 2 6500m, Camp 3 7200m, and finally we returned to Base Camp. We spent three days and on May 14 we started climbing the Everest. The plan was to climb the Everest by May 19. When we got close to Camp 4, somewhere at 7800m altitude, I and Tendi Sherpa, my expedition guide, were told that the wind at Camp 4, 7950m, was close to 85km/h. We decided to urgently go back to lower camps. We embarked on the second attempt towards Everest after a day off, on May 20th. The first try and the strong wind had taken much of our energy, and the second attempt was very difficult. While at the Base Camp, I talked to my sister in tears. I needed energy and love from the world out of the mountains. It was a very difficult decision, and I needed a lot of support. 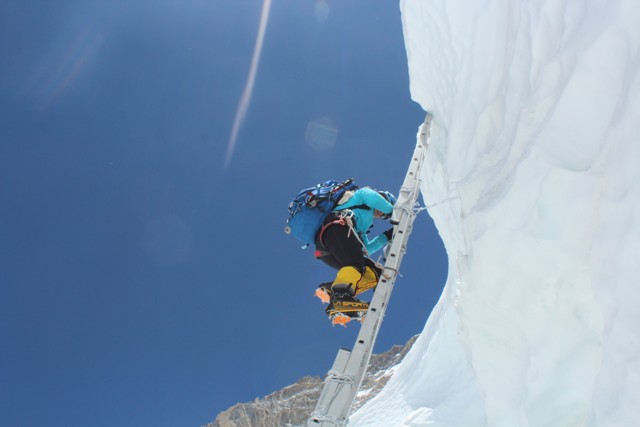 After Camps 2 and 3, on May 20 we came to Camp 4. The attack against the peak started that night at 20:30 hours. Walking towards the top was easier than I thought. I often looked at the sky and felt the pleasure that I was approaching the peak, the purpose I had sacrificed a lot for. I saw bodies of dead people and people near death. Had I faced these feelings at lower altitude, they would have had much more impact. But over there, I had a feeling as if I was immune to the bad things. All I had to do was to continue the journey towards my dream.

This climbing took a lot of effort, sacrifice, and much love. The Himalayas make us look very small in front of everything else. Modesty gives us the opportunity to pursue our dreams.

This expedition would not have been possible without the continued support of Xhimi Begeja and the Dajti Association, Skender Sina and the Pashtriku Association, Kosovo Mountaineering and Alpinist Federation with the mountaineering community, my parents and Ibrahimi family, and my friends.

Thank you for your contribution and trust in accomplishing my dream.